My name is Michael Diamant and I am the creator of this site. I have studied society planning at Stockholm University and have great interest in urban sociology, architecture, city planning, demography, history and social anthropology. Currently live in Stockholm and have a 15 year old daughter. I speak Swedish, English and some German. I have been interested in traditional architecture since I was 19, but it was first in 2013 that I decided to start a local Swedish Facebook group promoting new traditional architecture to the public. It was and is mostly a project posting group, showing that building traditional is possible and ideological acceptable (preferable) today. One year later I cooperated with a member of the same group to initiate the very successful lobby group “Arkitekturupporet” that has transformed the debate about architecture in Sweden (and increasingly many other countries), popularizing new traditional architecture. I have spoken many times in Swedish media and recently more and more internationally on behalf of this group. In 2018 I decided to make my Swedish project group international and switched language to English. In the same time this blog page was created. The Atlas followed a year later. While I have started these projects, they are all collaborations and I am very grateful to all the people that do priceless work to promote these platforms. 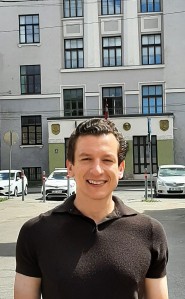 I have participated in Swedish national radio, podcasts, magazines and newspapers articles about why we should build new traditional architecture. Presented my work at TAG 4 where I got this nice words from David Brussat.

“On the second day, Michael Diamant, who runs the blog New Traditional Architecture, described his posts that continually update traditionalists all over the world with photographs of new work around the globe. His online map of new traditional projects is vital, as is his list of traditional architecture firms in scores of countries, with their websites. The information he provides has fueled architectural rebellions against the status quo in Sweden, Finland and elsewhere in Europe, and he has participated in creating a nonprofit to push that rebellion, called Arkitekturupporet or Architecture Uprising. Later that day, several young people in a panel of students and postgrads from abroad cited Michael Diamant’s influence on their decisions to switch coursework from modern to traditional architecture, or to learn architecture without architecture school.”

Long and fun interview in Dutch Podcast the Aesthetic city about architecture and city planning: (“Fighting the status quo in architecture & urbanism”)

Interview in Fastighetstidningen (“Var det bättre förr? / Was it better before?”)

5 Responses to About me